The History of Ding Dong! Merrily on High

Ding Dong! Merrily on High is one of the happiest and most spirited Christmas songs, and like many of the traditional carols that are sung today, it was written hundreds of years ago.  The earliest record we have of the song is from 1588, making it at least 428 years old.  However, the piece originally had nothing to do with Christmas -  it was a standard tune used for French dances.  The melody is written (sideways! - see the image below) on page 92 of a book called Orchesographie by Thoinot Arbeau, which was the pen name of Jehan Tabourot (1519-1595).  His choice of pen name was particularly interesting because it is an anagram of his real name (the same letters were placed in a different order).  A facsimile of Orchesographie can be viewed on the Library of Congress website. 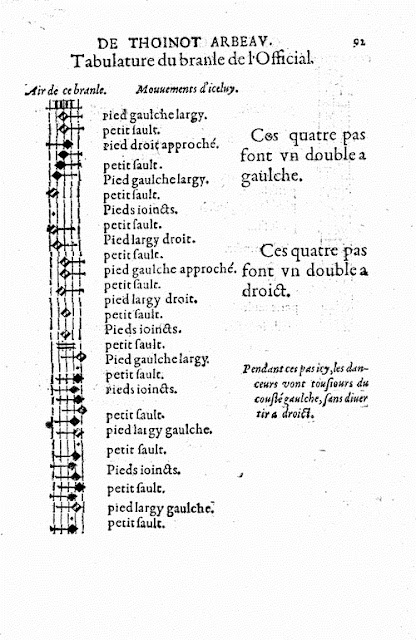 Orchesographie is a very important historical document that provides us with many of the popular melodies of the French Renaissance, and it gives instruction on how to dance to the music.  The book also includes woodcut illustrations of dancers and musicians.  The melody of Ding Dong! Merrily on High has the title Branle de L'Official, and while the book is authored by Arbeau, there is no indication that he wrote the music.  The entire book was translated to English in 1948 by Mary Stewart Evans and is a fascinating glimpse into the world of sixteenth century France.  It is available on Amazon with the title Orchesography: 16th-Century French Dance from Court to Countryside. Kyle Coughlin
Kyle Coughlin is a clarinetist, saxophonist, teacher, author, and composer, specializing in jazz and classical music. An active educator, he is a full time faculty member at Howard Community College in Columbia, MD. He has a doctorate in clarinet performance from the Peabody Conservatory and performs regularly in the Baltimore-Washington area. He has created numerous educational websites.